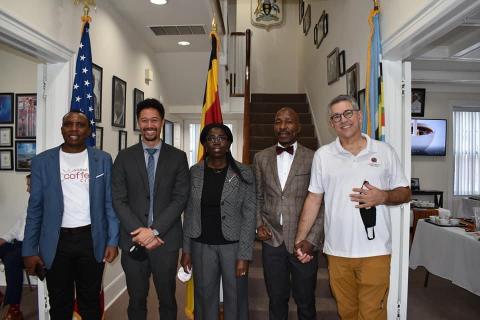 The Embassy of Uganda to the United States, in Washington, DC today held a coffee cupping and tasting event at the official Chancery. The event, organized in partnership with Inspire Africa Coffee and the Africa Coffee Bureau attracted coffee roasters, coffee importers and coffee shop businesses and diplomats in the Washington, DC area, who were curious about Uganda’s boost in promotion of Canephora which (Robusta) coffee  grows natively in Uganda in the Kampala Forest area and the Lake Victoria Crescent. While Ethiopia is considered the birthplace of Arabica coffee, Uganda is considered the birthplace of Robusta coffee.

The Embassy partnered with Mr. Nelson Tugume, CEO of Inspire Africa coffee and Mr. Saleh Nakendo, CEO of the Africa Coffee Bureau in putting the event together, and it was curated by Mr. Todd Arnett an Authorized SCA Trainer AST and member of the Education Advisory Council for the Specialty Coffee Association SCA.

Mr. Arnett, who has 25-years experience in the coffee industry, is a Quality Assurance instructor at the American Academy of Coffee Excellence in Williamsburg, Virginia. He has conducted training and consulting projects in coffee consuming and producing countries worldwide including consultancies with the Uganda Coffee Development Authority. He described Uganda’s Robusta as “Uganda’s best kept secret”. He welcomed the participation of the Africa Coffee Bureau who have helped to, discover niche markets that will reinvent African Robusta competitiveness in the enormously Arabica-dominated United States. 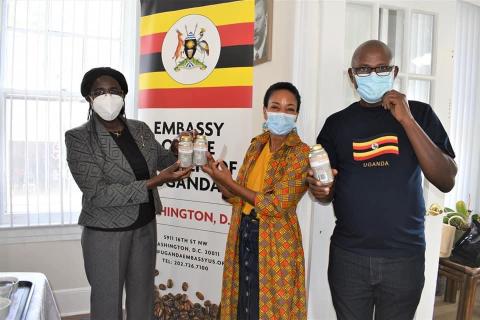 The African Coffee Bureau Africa Coffee Bureau (ACB) which was represented by Mr. Saleh Nakendo is a company founded by a group of Ugandans in Silver Spring city, United States to promote African coffees, cocoas, vanillas, teas and tourism.  Their ultimate objective is to undertake promotion, competitive market linkages and trade negotiations that will translate into premium incentive and profitability for the African coffees, cocoa, vanilla, tea and tourism in North American retail chain structure.

In her welcome remarks, Deputy Chief of Mission Amb. Santa Mary Laker-Kinyera welcomed the guests, explaining that for Uganda, Coffee is woven into the very fabric of not just the economy but the culture. She informed the attendees that Uganda is a main cash crop of Uganda and the biggest foreign exchange earner being among the top five products exported to the United States from Uganda. Uganda has experienced growth in the coffee industry, making it the largest exporter of coffee by volumes. Uganda is also the leading producer of Robusta and second largest producer of Arabica coffee, after Ethiopia, in Africa. She spoke about the Embassy’s commercial diplomacy mandate that requires the staff to ensure that Uganda products are promoted, tangibly and stocked on the shelves of stores in the USA and Ugandan coffee served in coffee cups in US restaurants. ‘Uganda is not only a good place to do business, but one in which an investor will get the highest return on their investment' She said. 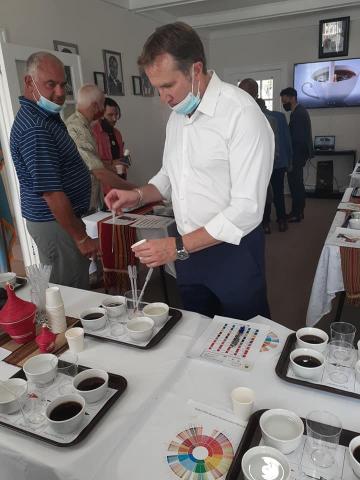 Mr. Bryan Schell, Desk Officer for Uganda at the State Department expressed deep pleasure at what he described as taking the relationship with Uganda to the next level, from the boardrooms and exchanges of Diplomatic Notes to seeing a growing tangible business relationship.

Mr. Nelson Tugume informed the attendees that Coffee is an item used to seal relationships and underscore close friendships in Uganda. He stated that it is his dream to ensure that there are Ugandan coffee shops all over the United States. He called on the Government of Uganda to support such an initiative that will see the value chain of coffee increase and change the lives of the farmers at the Ugandan grass-root. He called for more Ugandan coffees to get into the United States retail chain structure at fairer prices.

The event was attended by a cross-section of Coffee roasters and importers who included Ms. Candy Schibli, CEO of South Eastern Roastery, a Company that roasts and brews Ugandan Coffee and makes a cold refrigerated single-origin (Sipi Falls) canned brew, and several others. 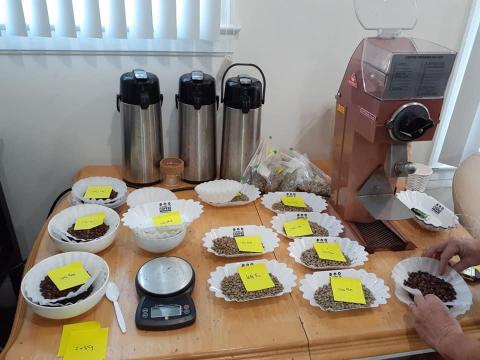 According to the Uganda Coffee Development Authority (UCDA), Uganda grows 2 types of coffee: Robusta and Arabica in the ratio of 4:1. Arabica is grown at altitudes ranging between 1,300-2,300m above sea level; while Robusta is grown at altitudes ranging from 900-1,500m above sea level making Ugandan coffee to possess very good intrinsic qualities due to high altitude, soils and farming systems not easily found elsewhere in the world. Ugandan Robusta has a remarkably impressive cup when wet processed. It is commonly deemed to be of exceptional quality and retains its flavour qualities very well, which cannot always be said of other washed Robusta coffee. The variety of Wild Robusta Coffee still growing today in Uganda's rain forests is thought to be some of the rarest examples of naturally occurring coffee trees anywhere in the world.

The next Uganda Coffee-cupping and tasting event is scheduled to take place on Friday September 10th 2021 at Uganda’s Permanent Mission to the United Nations in New York.